Posted by DSD Insurance an Acrisure Agency Partner on June 29, 2022

We covered this topic last month. But the trend 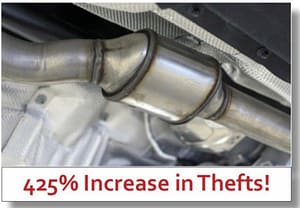 continues. Why? The crime rate is growing and likely to go even higher thanks to the pressures of inflation and the challenges that presents for many to be able to live.

Theft of catalytic converters is not a new phenomenon, but the number of thefts has been growing . . . substantially.

Thieves can remove a catalytic converter in a matter of minutes, typically sliding under a car with a battery powered Sawzall. Two quick cuts and their efforts are rewarded with several hundred dollars on the black market. Newer vehicles and hybrid vehicles are more commonly targeted as the converter’s precious metals are in better condition from less use and garner higher prices.

Thieves often target larger fleets where they can remove multiple converters at once, and from larger vehicles which are easier to get under. An insured in the Northeast with large passenger vans recently had seven converters stolen in one night, and replacement cost for these vehicles was over $15,000. A Colorado insured also had them removed from ten trucks over a two-to-three-week period. That’s a pretty costly expense.

Catalytic convertors are on all vehicles, so thieves have a lot of options as to where they are going to target. Make your vehicles a less desirable target by incorporating as many security measures as practical.

Educate your staff about the problem and ask them to report any suspicious activity
“If you see something say something”. The more “eyes” and “ears” you have “on watch” . . . the better!

Park your vehicles in a secured location
Preferably in a garage or fenced and gated yard.

Evaluate exterior lighting
Is lighting coverage adequate and are all lights functioning? If not, beef up lighting on your vehicles.

Add exterior alarms and surveillance cameras
Be sure you “advertise” the use of these crime-prevention tools. Thieves prefer easier targets!

Engrave the vehicle’s VIN and your phone number into the converter
Scrap yards are less likely to buy a converter with these identifications and may call police to check.

1) Guards, shields, clamps and cables that make removal of the converter difficult if not impossible.
2) Sensor-activated alarms that sound under the car, driving the thief out from under the vehicle.

Ask your local law enforcement to patrol your property often during the night
Invite your local officers to park at your facility during evening and weekend shifts — donuts are your option!